This web page contains the grant narrative and supporting documents for the City of East Moline's RAISE 2022 discretionary grant application.

East Moline has been working for some time on an overall master plan to improve connectivity, equity, and accessibility in the downtown area.  This year, the city embarked on an all-inclusive effort to create a comprehensive, sustainable Greater Downtown community that better integrates key goals of economic prosperity, social vibrancy, ecological integrity, and human experiences. 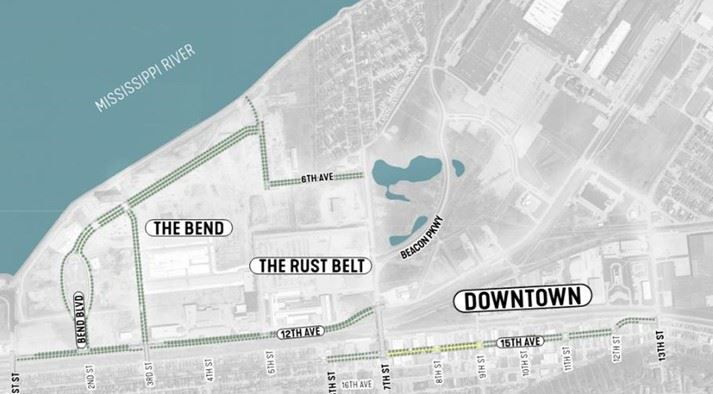 While East Moline is proud of its manufacturing legacy, declines in industry have diminished activity downtown, leading to disinvestment. The project would Greater Downtown East Moline a much-needed, sustainable face-lift while dramatically improving safety and connectivity. The overall project will improve connections to the community’s greatest natural asset: the Mississippi River.

The project builds on continuing investments in East Moline’s riverfront, including redevelopment of brownfield industrial sites between 12th Avenue and the Mississippi River. The City’s work has attracted an event center, hotel, and music venue that are drawing significant foot traffic and tourism. However, in its current configuration, 12th Avenue serves as a barrier to connectivity that prevents this economic activity from carrying over into the City’s downtown core. Similarly, residents of downtown areas and patrons of downtown shops and restaurants are unable to safely access transit, recreational opportunities, and jobs at these sites and throughout the Quad Cities region.

With a RAISE Grant, the City would have the opportunity to implement proposed enhancements to the Greater Downtown area and improve connectivity between the 15th Avenue Downtown district, The Rust Belt, and The Bend. If the RAISE Grant was awarded, the project would include:

Appendix A - Letters of Support

Drone Footage of the The Bend & Rust Belt - along 12th Avenue